Blood is a specialized body fluid. It has four main components: plasma, red blood cells, white blood cells, and platelets. Blood has many different functions, including:

The blood that runs through the veins, arteries, and capillaries is known as whole blood, a mixture of about 55 percent plasma and 45 percent blood cells. About 7 to 8 percent of your total body weight is blood. An average-sized man has about 12 pints of blood in his body, and an average-sized woman has about nine pints. 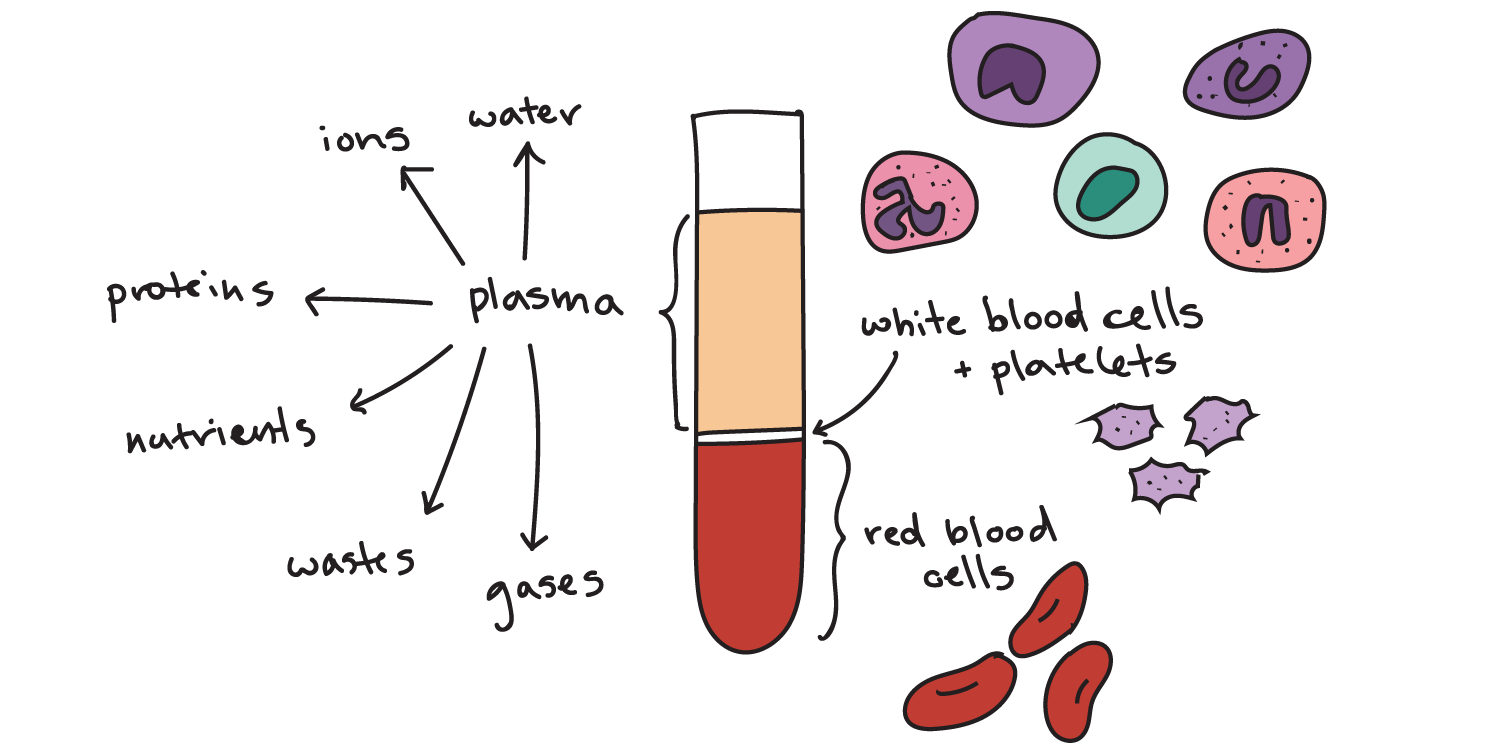 The Components of Blood and Their Importance

Many people have undergone blood tests or donated blood, but hematology – the study of blood – encompasses much more than this. Doctors who specialize in hematology (hematologists) are leading the many advances being made in the treatment and prevention of blood diseases.

If you or someone you care about is diagnosed with a blood disorder, your primary care physician may refer you to a hematologist for further testing and treatment.

The liquid component of blood is called plasma, a mixture of water, sugar, fat, protein, and salts. The main job of the plasma is to transport blood cells throughout your body along with nutrients, waste products, antibodies, clotting proteins, chemical messengers such as hormones, and proteins that help maintain the body’s fluid balance.

Known for their bright red color, red cells are the most abundant cell in the blood, accounting for about 40 to 45 percent of its volume. The shape of a red blood cell is a biconcave disk with a flattened center – in other words, both faces of the disc have shallow bowl-like indentations (a red blood cell looks like a donut).

Production of red blood cells is controlled by erythropoietin, a hormone produced primarily by the kidneys. Red blood cells start as immature cells in the bone marrow and after approximately seven days of maturation are released into the bloodstream. Unlike many other cells, red blood cells have no nucleus and can easily change shape, helping them fit through the various blood vessels in your body. However, while the lack of a nucleus makes a red blood cell more flexible, it also limits the life of the cell as it travels through the smallest blood vessels, damaging the cell’s membranes and depleting its energy supplies. The red blood cell survives on average only 120 days.

Red cells contain a special protein called hemoglobin, which helps carry oxygen from the lungs to the rest of the body and then returns carbon dioxide from the body to the lungs so it can be exhaled. Blood appears red because of the large number of red blood cells, which get their color from the hemoglobin. The percentage of whole blood volume that is made up of red blood cells is called the hematocrit and is a common measure of red blood cell levels.

White blood cells protect the body from infection. They are much fewer in number than red blood cells, accounting for about 1 percent of your blood.

The most common type of white blood cell is the neutrophil, which is the “immediate response” cell and accounts for 55 to 70 percent of the total white blood cell count. Each neutrophil lives less than a day, so your bone marrow must constantly make new neutrophils to maintain protection against infection. Transfusion of neutrophils is generally not effective since they do not remain in the body for very long.

The other major type of white blood cell is a lymphocyte. There are two main populations of these cells. T lymphocytes help regulate the function of other immune cells and directly attack various infected cells and tumors. B lymphocytes make antibodies, which are proteins that specifically target bacteria, viruses, and other foreign materials.

Unlike red and white blood cells, platelets are not actually cells but rather small fragments of cells. Platelets help the blood clotting process (or coagulation) by gathering at the site of an injury, sticking to the lining of the injured blood vessel, and forming a platform on which blood coagulation can occur. This results in the formation of a fibrin clot, which covers the wound and prevents blood from leaking out. Fibrin also forms the initial scaffolding upon which new tissue forms, thus promoting healing.

A higher than normal number of platelets can cause unnecessary clotting, which can lead to strokes and heart attacks; however, thanks to advances made in antiplatelet therapies, there are treatments available to help prevent these potentially fatal events. Conversely, lower than normal counts can lead to extensive bleeding.